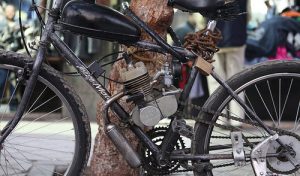 From 1 October 2014, petrol-powered bicycles will be banned on NSW roads and road-related areas such as footpaths, shared paths, cycle ways and cycle paths. The ban will include bicycles that:

The ban does not include:

Sunday. Jan 22. Wolli Creek to Cronulla. Grade: EasyStart: 9:00am from Wolli Creek Railway Station (Brodie Spark Drive.) This 25 km ride is a mixture of shared cycle ways and back streets. The ride gives excellent views of Sydney Airport, the beaches of Botany Bay and the lower Georges River. The ride follows the Cooks River to Botany Bay near Sydney Airport then continues south along the foreshore past the beaches of Kyeemagh, Brighton-Le-Sands, Ramsgate and on to Sans Souci, Morning coffee break at Dolls Point Café, then proceed across Captain Cook bridge and follow Shared User Paths and local streets through Taren Point, Woolooware and on to Cronulla for Lunch. After lunch riders may choose to catch train from Cronulla back to Wolli Creek or cycle back depending on weather or fitness(50Km total). Bring face mask if train crowded.Contact: Phillip Jackson 0434 633 490. Call or message to confirm. ... See MoreSee Less
View on Facebook
· Share

Liverpool BUG is affiliated with Bicycle NSW who are the peak body for cycling advocacy in NSW.

Members are encouraged to join Bicycle NSW and the enjoy benefits they offer.